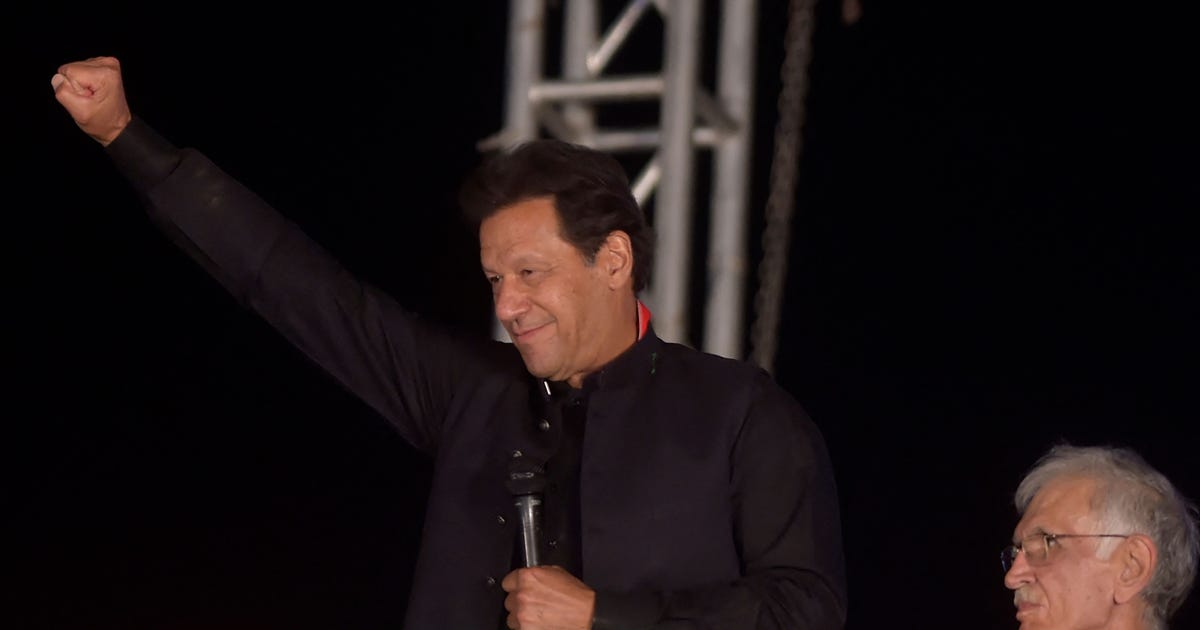 When Imran Riaz Khan lost his job as a presenter on Pakistani Samaa TV a week ago, he joined a growing list of journalists who found themselves out of work amid the country’s political unrest.

Fortunately, Riaz Khan has a YouTube channel with 2.6 million subscribers to fall back on.

Over the past two years, Riaz Khan has carefully cultivated his online audience, racking up more than 650 million views as he spoke about Pakistan’s often explosive politics. As efforts to oust the prime minister mounted, views on his channel grew.

“The other day, you, the new government, removed me from office,” Riaz Khan told his viewers in a video posted on April 12, accusing the new government of threatening to arrest him. “Do you think I will shut up? I will speak up and I will continue to say what is right.”

Emails to the PML-N party, which leads the new government, bounced back. The party has not responded to efforts to reach him via social media.

A new administration means a shake-up in Pakistan’s hard-hitting media world. So when the opposition succeeded in ousting Prime Minister Imran Khan, a charismatic former cricket star, Riaz Khan and other presenters who had supported his administration were left jobless. Rather than dusting off their resumes, Pakistani television journalists are turning to YouTube and other online platforms to reach the country’s growing number of internet users.

They will have a lot to talk about. Pakistan has been in political upheaval since Khan was removed from office. Earlier this week, the former prime minister held a rally of his supporters in Peshawar, a city of 2 million people. More than 100 members of his political party have resigned from the National Assembly, the country’s lower house of parliament. Continued unrest looks likely, providing material for news anchors who have migrated to YouTube and other online platforms.

Journalists using the internet to reach an audience after finding themselves on the wrong side of the government are not unique to Pakistan. In Nicaragua, Confidencial was forced off the air last year, but found a YouTube audience of 350,000. Venezuelan journalist Sergio Novelli has used his presence on Facebook to launch a YouTube channel.

But the trend is pronounced in Pakistan, the world’s fifth most populous country. Prominent presenters including Nusrat Javed, Murtaza Solangi and Maleeha Hashmey lost their jobs due to their reporting and views.

How the media is controlled

Talat Hussain, a former Geo News presenter, said the government, which buys a lot of ads to promote its initiatives to the public, can take advertising money from the channels, forcing them to remove unwanted anchors. The government can also tell cable operators to take down a channel or use threats of legal action to fend off unwanted voices, he says.

Hussain would know. The TV journalist was fired under Khan’s administration after he began to question the legitimacy of the prime minister’s 2018 election victory. This, he says, “didn’t sit well” with Khan’s government, which prompted Geo News to fire him.

So Hussain started looking seriously at his YouTube channel. Now he works the channel, which has 198,000 subscribers, and his Facebook page as a business. Hussain also works as a consultant.

“I get my YouTube output seven days a week,” Hussain said, adding that he hasn’t missed a day in two years. “You have to be consistent in order to build a strong base that is interested in listening to you.”

Imran Khan’s party, the PTI, did not respond to requests for comment. Neither Geo News nor The Gulf News responded to a request for comment. The Independent Urdu had no comment.

The Rise of the Internet in Pakistan

Although television remains popular, people are increasingly going online, partly because of smartphones. Just over a third of Pakistan, or around 83 million people, are online and internet usage is growing smartly.

This means that TV presenters who turn to online platforms find a wider audience.

Since launching her YouTube channel in January 2020, Essa Naqvi, who previously worked for two of Pakistan’s biggest TV channels, has grown an audience of 116,000 subscribers.

Part of the appeal may be that Navqi’s videos are in Urdu, attracting an audience of over 9 million Pakistani expats. About 60% of its viewers are outside Pakistan, with the United States being its largest market. The UK, India, UAE and Saudi Arabia are also big markets for him.

Of course, news on YouTube is a mixed bag. Journalists discussing sensitive topics can quickly find their content demonetized, reducing their income. The popular video platform has also been a source of misinformation, prompting more than 80 fact-checking organizations appeal to YouTube to do a better job of moderating content.

YouTube tries to balance the free expression of the creators of its videos with the needs of advertisers who place promotions in that content, the service said in a statement. The company claims that it enables full monetization when topics are discussed in a news or educational context. It acknowledged that its algorithmic content moderation could make mistakes and said it allows videographers to request a one-person review.

Those in power also use YouTube effectively. Imran Khan’s party had a sophisticated team that collected videos and posts on its social media, which helped it gain an audience among expats, city dwellers and young voters.

Not all YouTube outlets have the same experience and training as Hussain and Naqvi, and may not have the editorial checks found in print or television. Haqeeqat TV, for example, often leans into a tabloid presentation of pictures and videos narrated with talking points. It does not identify or show its presenter.

Haqeeqat TV claims it is a legitimate medium and notes that other print and electronic publications cite its stories when it publishes news.

“Our content has been verified by our team and verified by trusted sources,” a representative said in a direct message on Twitter.

Sajjad Malik, a Pakistani journalist who has written a thesis on the role of media in India-Pakistan relations, says YouTube adoption is good for displaced journalists but could be bad for the profession. To avoid this, he says, the country’s YouTube presenters would have to create a standard they all abide by.

“If you give people trash, you’re not going to survive and it will end up giving journalism a bad name,” Malik said.


Get the CBS Culture newsletter

Why Tax Refund Loans Are Bad: Fees, Interest, and Risk