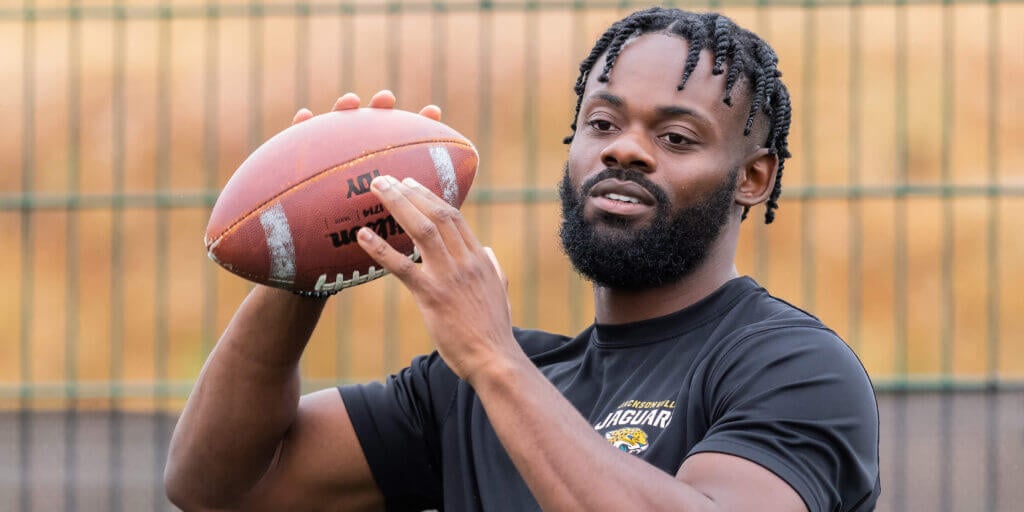 In 2017, Ayo Oyelola’s mind began to wander during a lecture during the first year of his law degree at the University of Nottingham. He loaded up YouTube and came across highlights from NFL running back Saquon Barkley.

Inspired by what he saw, he attended a practice for the college football team that same day. Seven years later, he is on his way to becoming a professional NFL player with the Jacksonville Jaguars.

“Coaches told me, ‘You look like an NFL player’ because of the way I run,” said the 23-year-old from Dagenham, east London. Athleticism. “So I was like, ‘Well, I might as well try going to the NFL then.’

“The position I play is all about the footwork, and I have good footwork. Coaches often ask me, “How’s your footwork after such a short time?” and honestly, it’s because of football. I’m used to using my feet and moving quickly. It comes naturally to me, so it helped me a lot. I’m in good shape and it all comes from football.

Ten years ago, football was the sport Oyelola dreamed of playing for a living.

After leaving Southend United’s academy in Essex, he joined Sunday league side Dagenham United after a manager recommended he play for them for a year to help him develop with a view of a trial at Chelsea.

Oyelola took part in a talent identification day and was offered a place at Chelsea academy aged 13, alongside future Premier League regulars such as Mason Mount, Tammy Abraham, Declan Rice, Eddie Nketiah and Trevoh Chalobah. From this group, one player stood out.

“Mount was playing with the year most of the time, so I didn’t see him much, but he was definitely the most technically gifted. Eddie Nketiah was good too (and) Tammy, but Mount was probably the best,” says Oyelola, who was released six months later.

“They gave me their reasons. I was a goalscorer but I was just pace and power. There wasn’t a lot of linking play, and they said they were looking for a more complete striker.

oyelola signed for Dagenham & Redbridge and was playing for the club’s Under-18s when he was 14. But as his GCSEs (national 16-year-old exams) approached, he had to stop to focus on his studies.

Then an opportunity presented itself at Ebbsfleet United in Kent at the age of 16, which prompted him to decide whether he should pursue a career in football or go to university.

“I decided college was best for me, so I left just before school started in 2015 and started doing my A-levels (national exams at 18). I’ve always played for St Alban’s reserve team when I was in sixth grade, but at that point I knew I wasn’t going to be playing professional football anytime soon.

“I didn’t play college football at Nottingham because I knew I didn’t want to be a professional so there was no point. But the first day I went to play American football for the first time, I decided to give it my all.”

Most players who enter the NFL do so after playing in college, which usually involves playing in stadiums with huge capacities and coverage by major sports broadcasters in the United States. At the University of Nottingham, however, Oyelola played in local parks to small crowds. According to him, “99.9%” of the people he played with were just there to have a good time, rather than dreaming about the NFL.

How did he stay motivated in an environment where his peers didn’t share the same level of focus?

“It’s the first time I’ve been asked that,” he said. “It was tough. At times I was like, ‘Why am I doing this?’ I don’t do it for the people here, other people are going to see it soon and it’s going to give me my chance.’ So I just had to suck it up and keep going. But it was tough.”

Eventually, this game tape served its purpose. After appearing in the college All-Star Game, after which he was named MVP after posting four sacks, 12 tackles and three tackles for a loss as a rusher, European teams began reaching out to him.

At Nottingham he played in various positions in defense and was a standout prospect. A German Football League team wanted to sign him, but COVID-19 derailed that, which turned out to be a blessing in disguise.

Oyelola got a call from the NFL’s London office after finding out about his highlights. He then did some training in a south London park to test his athletic abilities. In November 2021, he earned a spot in the NFL’s International Pathway Program (IPP).

“If I was in Germany I might have gotten injured, I might not have been able to attend the practice they (the NFL office in London) wanted me to do, it would have slowed down the things. So it worked well in the end. But at the time, it was tough.”

Aspiring NFL prospects don’t often get called twice to the NFL IPP. During his pro day, where he was tested by NFL scouts from across the league, he tore his hamstrings and was not assigned to an NFL team.

Oyelola decided to sign with the Winnipeg Blue Bombers in the Canadian Football League (CFL), which is widely considered the top league outside of the NFL.

While playing in Canada, the Winnipeg Blue Bombers won the Gray Cup and Oyelola once again put himself on the NFL’s IPP radar, earning an unlikely second invite.

“In Canada, I won a ring and experienced what it’s like to be a pro for a whole year. Every time I practiced, I kept saying to myself, “I’m going to the NFL.” I was present but I remembered why I was there. I have no right to anything. I was grateful to be there, but deep down I knew I was going to the NFL.

He expected to play in the CFL for at least three years but, following his second NFL IPP call-up after just one season in Canada, he was assigned to play with the Jacksonville Jaguars as a than security. He is now part of their practice squad and fighting for a chance to make the final 53-man roster.

The setbacks Oyelola has experienced along the way have only served to better prepare him for this moment. “I learned to deal with rejection at a very young age, so it doesn’t bother me anymore, because I know it’s going to work.