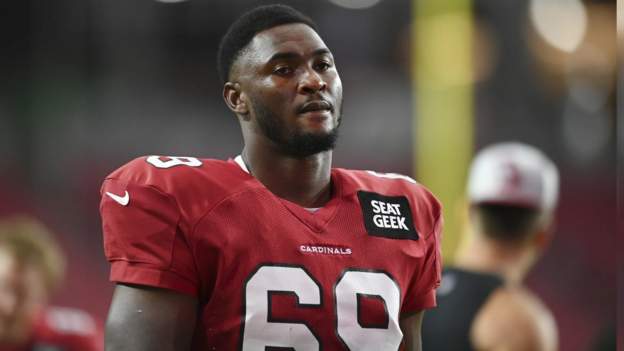 The brutality of life in the NFL did not deter Haggai Ndubuisi from pursuing a career in American football.

The 21-year-old Nigerian only started playing the sport four years ago and appears to have capped his remarkable rise earlier this year when he signed for the Arizona Cardinals in April.

However, he was dropped from the roster four months later. Yet he vowed to fight his way back to the road that took him from Abuja to Arizona.

“For me there is no looking back,” he told BBC Sport Africa.

“It’s about not giving up. I’ll keep chasing my dream. I’ll just keep training and working really hard and fixing the mistakes and the things that I think I should do better or should have. do better.

“[I will] keep chasing the dream and keep believing and hoping that one day I will also be among the starters at one of the clubs.”

Standing six-foot-six, Ndubuisi grew up playing football and basketball in Nigeria before finding a passion for American football on the internet.

However, West Africa’s largest and most populous nation has few players or clubs in a sport that dominates in the United States.

“American football is not a sport that is in Nigeria per se – it is like a hopeless sport. There is no future,” he said.

“It was basically watching YouTube and going to train on our own. When we started, people thought we were joking.

“Over time, we started to organize camps to attract more people.”

This is part of a drive to expand the scouting operation on the continent for the NFL, which has more than 100 professional players of African descent.

“We know that Africa probably has the best athletes in the world,” said Umenyiora, who was born in London to Nigerian parents.

“For the NFL, you have to be big, strong, fast, aggressive and smart.

“We went to Senegal, South Africa, Kenya, Ghana and Nigeria. And then we found the best guys we could, and we brought them all to Accra, Ghana.

“We want to provide infrastructure and knowledge for these guys to know what the NFL game is all about. And they’re going to have these opportunities. That’s what we’re here for.”

Speaking at the Accra Camp, NFL International Director of Operations Damani Leech added: “We have over 40 players from seven different countries.

“We could see ourselves being in Nigeria or South Africa, or some other country in the years to come.”

“No one believed that I would make it”

After his time at UpRise Academy in Ghana, Ndubuisi was on a path where NFL scouts could lay eyes on him.

”It was a one-week camp. Three of us were selected and we were invited to attend the combined NFL camp in London,” he explained.

“I think out of 47, six of us came out of the combined NFL camp in London. Three of us from Nigeria and three other guys.”

From there, Ndubuisi was invited to the NFL’s International Player Pathway program, a ten-week event in Arizona in the United States.

“After my 10 weeks playing American football in the United States during the IPP program, I received a call from the general manager of the Cardinals,” he recalled.

“It felt like they had to try me and teach me a few things. That’s how the Cardinals signed me.”

NFL competitive guidelines allow teams to hold a larger offseason roster, but that must be trimmed by Aug. 15 before the new season — and Ndubuisi’s rise was about to plateau.

“It’s about making the list of 53 players,” said Ndubuisi.

“Everyone was doing their best and just trying to show what they were capable of doing. At the end of the day, they choose who they want to choose.

“It’s all about the numbers.”

Despite his release, bitterness is far from Ndubuisi’s mind.

American football has a low profile in Nigeria, but it has found its way to one of the most lucrative sporting competitions in the world, and he hopes his dreams and those of many others are just beginning.

“To tell the truth, no one ever believed that I was going to reach this height,” he concluded.

“My ambition is to get a new team. Reaching the league alone has brought hope.”

Most diabetic foot care YouTube videos ‘are not adequate’