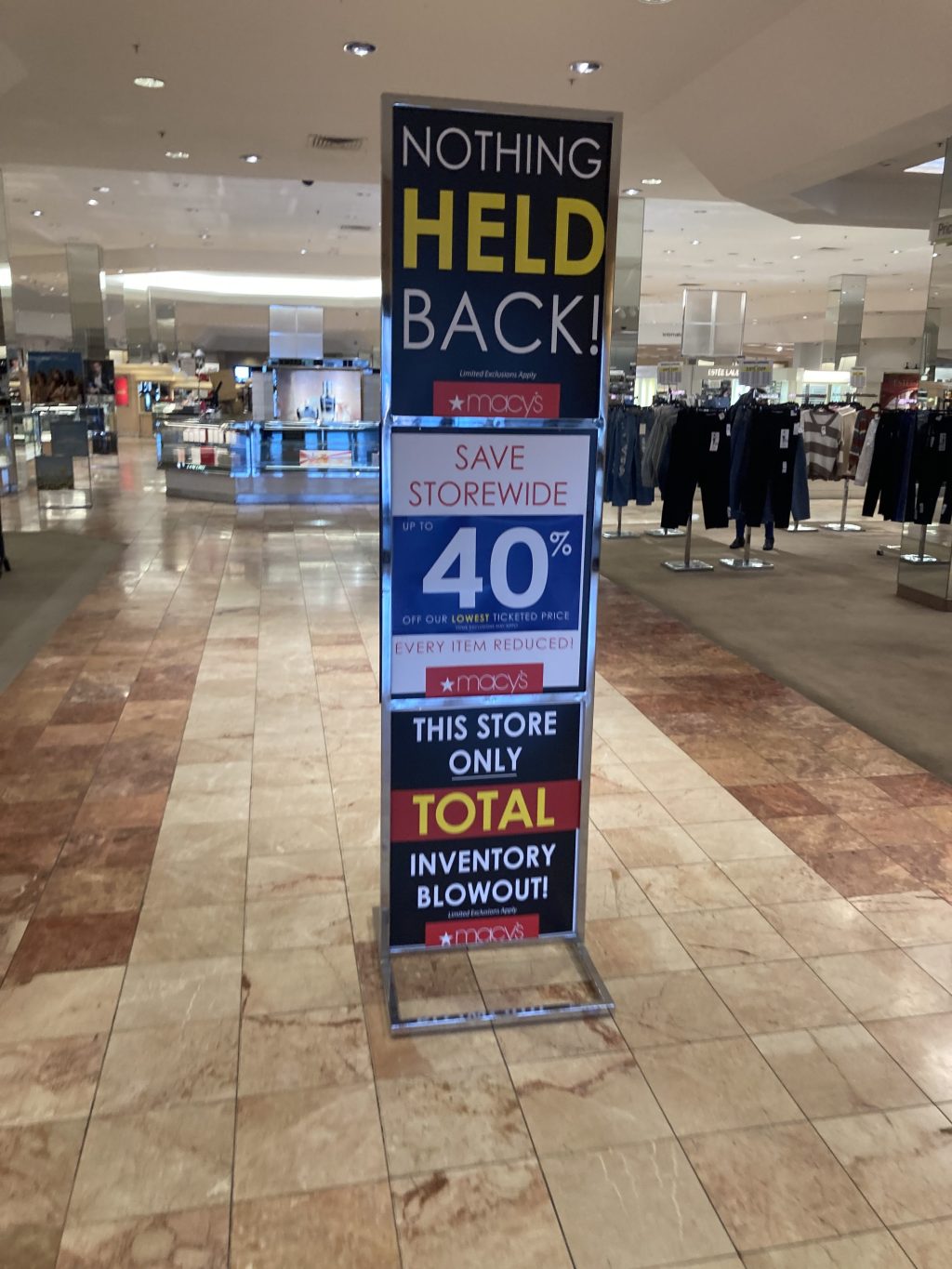 A year after Boulder city officials approved a redevelopment plan for Macy’s Inc. (NYSE: M) location in the Twenty Ninth Street shopping area, the store has been asked to close in the coming months.

The department store at 1900 28th St. was among seven locations across the country that USA Today says will close around the first quarter of 2022. Macy’s in Centennial is also on that list.

The department store chain has not confirmed Boulder’s closure with BizWest, but signs around the store advertise a massive sale of inventory throughout the store. A store employee told BizWest that the Boulder site will indeed close soon, but workers have not yet been told a specific date.

Since 2016, Macy’s has announced the closure of hundreds of stores, but the company’s locations in Colorado have so far been spared. Locally, Macy’s operates in Boulder, Broomfield, Fort Collins and Loveland.

Last year, the Fort Collins location at the Foothills Mall was purchased by a private equity firm tied to the development company that was tapped to lead the mall’s redevelopment.

Plans have been in place to redevelop the Boulder Macy’s for several years.

In early 2021, Boulder City Council decided by an 8-to-1 vote to approve a site plan that proposes to turn the aging department store into mixed-use office and retail space.

Despite the approval, Macy’s project remained controversial due to lingering concerns that adding office space will exacerbate Boulder’s job-housing imbalance.

This imbalance refers to Boulder’s ongoing challenge to provide affordable housing options for the city’s workforce while continuing to add high-paying professional jobs that drive up the cost of housing.

Boulder’s concern about the imbalance between jobs and housing is so acute that the council in early 2019 passed a moratorium on development in a part of the city that includes the Macy’s site. This moratorium, inspired by Macy’s proposal, was in part to ensure that existing residential and commercial space would not be gobbled up by developers and turned into office buildings. Macy’s plans were launched before the moratorium, which was canceled in October 2019.

In an effort to address these concerns, Macy’s has committed to contributing $3 million to Boulder’s Affordable Housing Program.

This article was first published by BizWest, an independent news agency, and is published under a license agreement. © 2022 BizWestMedia LLC.