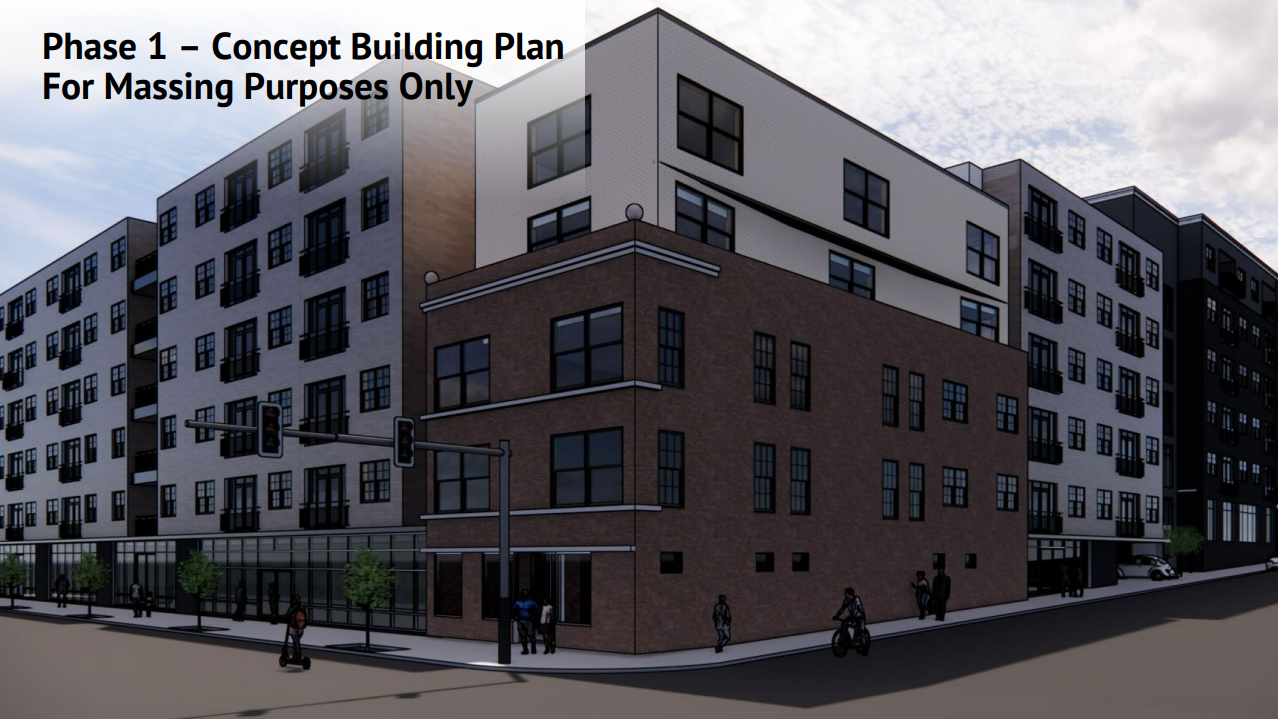 After pledging to save the historic office building at 229 Auburn Ave., developers of the “Sweet Auburn Grande” project are working on new design concepts to incorporate it. They also confirmed that a “Phase 2” will include the rehabilitation of two other historic structures.

“We are happy to continue working with the community until we are successful,” Joel Reed, president of co-developer Gorman & Company’s Southeast Market, said during an Aug. 22 meeting of the neighborhood planning unit M.

Conceptual site plans for Phases 1 and 2 of the Sweet Auburn Grande, as presented by the developers at an August 22 M Neighborhood Planning Unit meeting. Design is not final and details may change.

At this meeting, the development team gained support from this group and Sweet Auburn Works (SAW), a conservation-minded economic development nonprofit. The collaborative work to save 229 Auburn also drew praise from Matt Adams, acting director of the city’s Historic Preservation Studio and executive director of the Atlanta Urban Design Commission (UDC), who will review proposed changes to the structure.

“I’m glad to hear you’re working with Sweet Auburn Works on this,” Adams told Reed during the meeting. “They have great people in this team. I have every confidence in the world it’s going to be okay.

Gorman, along with nonprofit Butler Street Community Development Corporation (CDC) and consultant Red Rock Global, aim to redo most of the block on Auburn Avenue between Bell Street and Jesse Hill Jr. Drive into a mixed-use structure with affordable housing. The plan originally involved demolishing 229 Auburn, which is at least 114 years old and housed pioneering African-American businesses in Sweet Auburn’s heyday, including a branch of the Atlanta Life Insurance Company and the first state-chartered black bank of Georgia. The city’s In Rem review board had previously ordered the demolition for safety reasons, but the UDC must approve and did not.

The developers have long resisted pressure from the Atlanta Preservation Center (APC) and other conservatives, saying there was no money to save 229 Auburn. Ultimately, however, the demolition plan became a threat to project funding, as organizations around the Sweet Auburn Historic District made it clear they would publicly oppose it. The developers quickly changed their minds earlier this month. Reed – who was at NPU-M to solicit support for an Invest Atlanta funding request – said offhandedly that the “cost will likely go up a bit” from the estimated $41 million budget due to the building being saved. .

Reed presented two concept illustrations of how 229 Auburn could fit into the Sweet Auburn Grande. The general idea is to retain its exterior walls as the northwest corner of the structure and to build apartments above, but set back to preserve the historic roofline.

Actual design may vary. Reed said the developers were in negotiations with SAW over the scale of the project and said they would likely increase the number of housing units and reduce the number of parking spaces.

Another concept illustration from Sweet Auburn Grande showing a higher density alternative. The illustration is intended only to show the general volume of the structure and is not a final design.

According to a presentation by the developers, the current plan provides for: 90 housing units, 85% of which are affordable for households making 50 to 60% of the region’s median income and the rest at the market rate; 8,000 square feet of retail on the ground floor; and a six-storey, 245-space parking structure. But the developers’ agreement with SAW includes a cap of 203 parking spaces, and Reed said there could be as many as 100 housing units in the final design.

Letters of support from SAW and the Atlanta Downtown Neighborhood Association were both conditioned on saving 229 Auburn and making the design more pedestrian-friendly and reducing parking, among other demands.

“We’ve come a long way,” SAW executive director LeJuano Varnell said at the NPU-M meeting, describing three developer meetings since July. He said the developers have made progress in “creating something that matches the character, tone, tenor and spirit of this neighborhood”.

Although the project has gained support, the various local organizations have made it clear that continued input and monitoring is expected, including on short-term historic preservation as well. Varnell said he hopes the developer funding will include money to “at least shore up this building” at 229 Auburn, saying “we can’t lose character anymore” in historic Sweet Auburn. Reed pledged to continue conversations, including ideas such as adding some type of historical marker to 229 Auburn.

The building at 229 Auburn Ave. as it appears today. (Photo by Maria Saporta.)

One historical aspect of the building not discussed at the meeting is a rare, but racist, advert for Gold Dust Twins soap painted on an outside wall. The painting was revealed when the adjacent Herndon Building, another historic structure, was demolished after being badly damaged in a tornado in 2008. APC executive director David Mitchell later said the UDC would likely require the preservation of all exterior walls of 229 Auburn, leaving the paint intact. “The Atlanta Preservation Center is very interested in working with Gorman and the Butler Street CDC to preserve the Gold Dust Twins. [advertisement] to explain the richer history of this building,” Mitchell said.

Reed also confirmed that a “Phase 2” of Sweet Auburn Grande is planned that would include two other vacant historic buildings across Jesse Hill Jr. Drive that are also owned by the CDC. One is the 1920 Butler Street YMCA, which gave birth to the CDC itself. The other is the 1948 Walden Building, named after a lawyer and civil rights leader, which sits next to a giant mural of civil rights leader John Lewis that has become a tourist attraction.

Reed said the “Phase 2” plan involves restoring the two buildings as community and commercial space, and creating a “new green space in front of the John Lewis mural”. There is no timetable for this phase. APC has requested proper management of these buildings in the meantime.

For Phase 1, the developers plan to appear before the board of Invest Atlanta, the city’s development authority, at its September meeting with a request for financial assistance. A first hearing at the UDC is scheduled for October. The objective is to apply for a building permit in July 2023.

Update: This story has been updated with a comment on the Gold Dust Twins ad.

Can I watch KSI for free? Live streaming options for KSI vs. Swarmz 2022 YouTube boxing fight